Dedicated on July 6, 1907. It was named for Brigadier General William Haines Lytle (1826-1863) who was killed at Chickamauga during the Civil War, and whose family home still stood on the site at that time. The city bought the land bounded by Third, Fourth, Lawrence, and Lytle Streets in 1905. Many dwellings were razed including the Lytle home.
The eleven foot high Lincoln Statue, (without a beard), was created by George Grey Barnard in his New York Studio from 1911 to 1916. On March 31, 1917, the statue was presented to the city by Mr. and Mrs. Charles P. Taft. Former President William Howard Taft made the principle address at the unveiling.
The last card shows a more modern view of the park, and as you can see there is a highway under the park in the center of the card. This is the connector that I-71 used to unite with I-75 on the western side of the city. On July 2, 1964 the city accepted an offer from Western-Southern Life Insurance Company to pay for a concrete slab to support the park to allow a tunnel to be dug underneath it. In return the insurance company received the rights to erect an apartment building over the tunnel at 550 East 4th St.

The 2nd postcard above shows the Taft Museum from Lytle Park.

The 1st view above is a  very nice non-postcard image of the park, it also shows the Pugh Building on the left, the Taft Museum in the center, and above it Mount Adams. The 2nd image shows Lincoln looking west down Fourth Street. The last two are postcards of Lincoln. The image below is a bird's-eye-view of Lytle Park and the buildings around it. I have numbered many of them and listed them below. 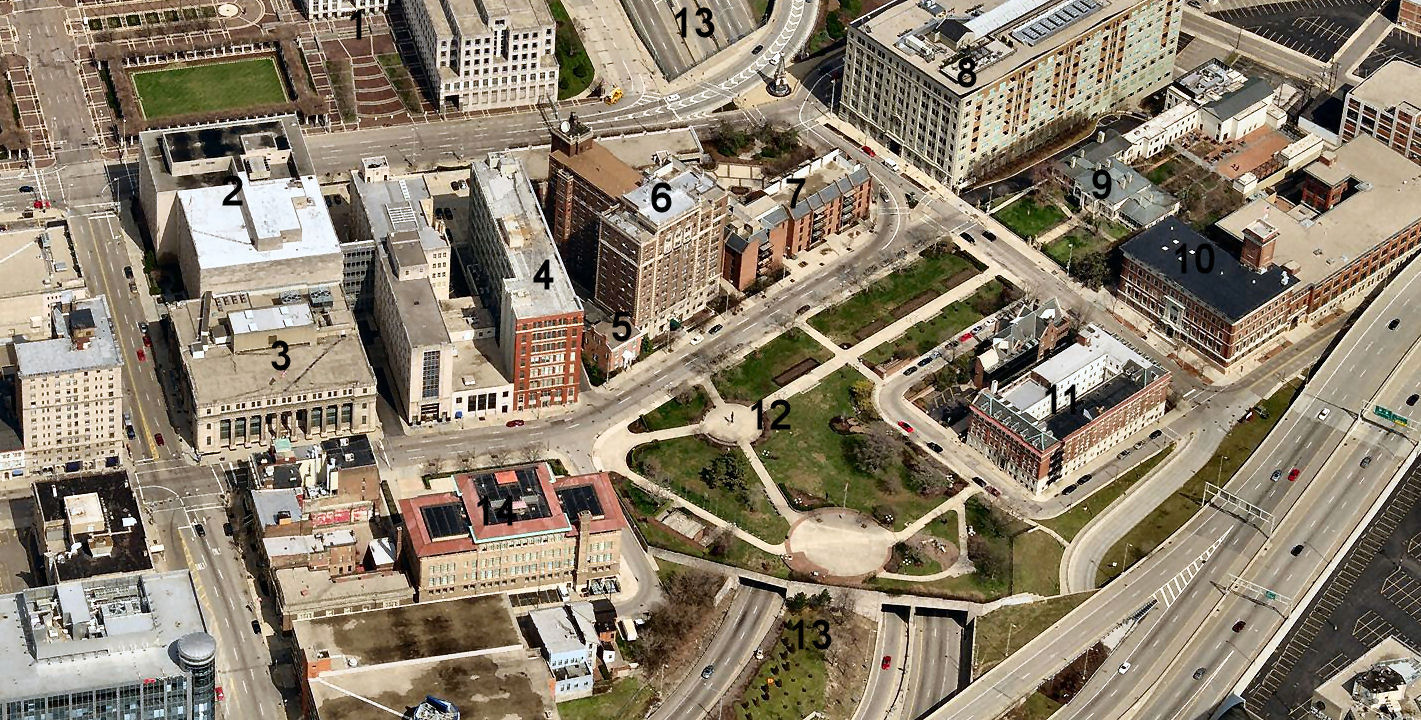 Lincoln Park was in the area where Union Terminal now stands. The city owned this land and in 1858 it was converted to a much needed park in the overcrowded west end. It was one of the most heavily used parks in the city. During the winter as many as 5000 people could be seen skating on the frozen pond, (see postcard below) and in the hot summer nights as many as 1,500 tenement dwellers slept on the 10 acres of the park. Images above are not postcards.

By the late 1920s this area had become a vast slum and at that time the city needed a single railroad terminal away from the riverfront and its constant flooding so this spot seemed ideal for its construction. Of course the 1937 flood proved you can't hide from Mother Nature.
The statue you see is of Captain John Desmond who was the company commander of the First Regiment of the Cincinnati Ohio National Guard. He was killed as he led his men in an attempt to drive back the mob that was attacking the court house in 1884. The Statue is now located in the lobby of the Hamilton County Courthouse. The structure seen on the left in the 1st card is the convent and school of the Sisters of Mercy, a teaching order, it founded Edgecliff College.

Originally called "Schoenberger's Woods" this site along the Vine Street hill south of McMillan was the summer home of Cincinnati Millionaire George K. Schoenberger. It later became of source of stone used for the foundations of many Cincinnati homes. After the quarry was abandoned, the site turned into a dump. In 1904 the city acquired the 20 acres of land and completed a park that had already been started by local volunteers. Not seen in these cards is the 10' granite monument honoring Friedrich Ludwig Jahn (1778-1852), founder of the Turner Society in Germany, (see Turner Page). Turner societies regularly paraded up Vine Street from their hall at 14th and Walnut Streets to hold picnics and other events here. It was unveiled on October 22, 1911.

This park of about 92 acres sits on top of a hill overlooking the Ohio River with Lunken Airport to the left and 300' directly below. This area was called Bald Hill when the first white settlement in southwestern Ohio was located at Columbia in the area below by the Ohio. Bald Hill got its name because the Indians had supposedly cleared away the trees in order to spy on the invading white man. Later the hill was covered by the vineyards of the first Nicholas Longworth, which yielded the grapes for his famous Catawba wines. It was then called Tusculum Heights from the old steamboat-building town of Tusculum located on the river near by.
Most of this land was purchased in 1917 by the city with funds donated by Mrs. Frederick H. Alms (1846-1921) as a memorial to her deceased husband.
The shelterhouse seen in the first four cards was constructed in 1929. Not seen in these cards is the memorial to Stephen Foster donated by pharmaceutical manufacturer Eli Lily in 1937. The composer of "My Old Kentucky Home" is shown facing the Ohio River, with his gaze fixed on the far Kentucky Hills.

Located on Mt. Lookout at the end of Observatory and Principio Avenues sits the current 224 acres of Ault Park. In 1911 205 acres of the park was donated by Levi Addison Ault (1853-1931) and his wife, Ida May (1853-1931). The two level Renaissance style pavilion opened on July 4, 1930. Containing a soda fountain, lunchroom, and cascading fountain, the pavilion would have dancing with big name bands.
The fifth card is not titled correctly. The original Cincinnati Observatory is next to the park, but not in the direction shown in the card. You can see the observatory faintly in the last card to the right.