Cincinnati television's most influential woman during the 1940s, 50s, and 60s was Ruth Lyons. Her show, The 50-50 Club aired every day with  entertainment, news and interviews on WLW radio, beginning in 1942, and on television in 1951 on the  AVCO TV network. It was called the 50-50 club because when the radio show first started only 50 women were allowed in to the studio for the broadcast. The number of women allowed was later expanded by another 50 and thus became the 50-50 club. Card 1 shows (back from left to right): Ruby Wright, orchestra leader Cliff Lash, and singer Bonnie Lou; (front row): Bob Braun, Ruth Lyons, and Peter Grant. The, autographed on back, 2nd card shows Bob Braun who took over the show after Ruth Lyons left. Bob also hosted the Bob Braun Bandstand, a local version of Dick Clark's American Bandstand. His son Rob Braun is the anchorman on one of the local television news shows.  All the great stars of the day could be found riding the elevator up to the 50-50 Club studio, one day people were startled to see Roy Rogers horse Trigger crammed into the car for the ride up, they wanted Roy to ride his famous horse onto the show.
Ruth Lyons began her career as Ruth Reeves, her maiden name, at WKRC in 1929. She was to become one of the first female program directors in the country.

The non-postcard image above shows the main participants of the Bob Braun Show in the 1970s. From left to right are: Rob Reider, Colleen Sharp, Bob, Nancy James and Gwen Conley. The 2nd postcard image shows a cutout of Bob when he was a lifeguard at Sunlite Pool at Coney Island and Bob Braun in his later years at Sunlite Pool.

This is a large 1940 double card of the cast of the Boone County Jamboree that played on "The Nations Station" WLW for 2 1/2 hours every Saturday night. Broadcasting from Cincinnati's Emery Auditorium this show was the precursor to the Midwestern Hayride. Started in 1938 it lasted until 1948. In the early years Boone County Jamboree was heard virtually everywhere in North America due to the 500,000-watt transmitter being used at that time. In 1941 WLW stated that the performers had performed before 1 million fans at state and county fairs, theaters, auditoriums, etc. There were up to 100 performers that were on call at the programs peak. It is considered one of the all-time great country music radio programs. 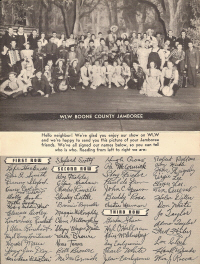 Born out of Boone County Jamboree, Midwestern Hayride became channel 5's country music showcase starting in 1948, it was also a summer replacement for Sid Caesar's "Your Show of Shows" on the NBC network. Some of the stars appearing in the show over the years included Tex Ritter; Dolly Parton; Johnny Cash; Willie Nelson; Waylon Jennings; Barbara Mandrell; Bonnie Lou; Paul Dixon; Dean Richards and the Lucky Pennies; Charlie Gore and the Rangers; Zeke Turner and the Pleasant Valley Boys; the Geer Sisters (Jo Ann and Mary Louise); the Hometowners with Kenny "The Round Mound of Sound" Price; Buddy Ross; Freddy Langdon; Jay Neas; the Midwesterners square dancers; Rob Reider; Willie Thall; Judy Perkins; the sisters Millie and Dolly Good (The Girls of the Golden West); Kenny "The Jumping Cowboy" Roberts; Lige and Red Turner; Rome Johnson and the Prairie Ramblers. The show went National again in 1966 until it ended after 24 years in 1972. The third image is a modern postcard of the 1953 cast of the Midwestern Hayride minus the dance group, The Kentucky Briarhoppers.

It was claimed that Jack Rogers sounded like Gene Autry. He worked with various bands on the radio in West Virginia, Kentucky, and Ohio. He played for several years in Cincinnati with the famous "Tacoma Barn Dance Boys and Girls" which later became the "Thunder Bay River Boys". In 1947 he was in Hollywood with his own group, the "Modern Pioneers". He made several records with the King label including "In Shady Brook Lane", "After All These Years", "You Done Me Wrong".

Louis or Louie Innis worked at WLW, as a guitarist, during the time of the Boone County Jamboree and the Midwestern Hayride. He accompanied Doris Day during her stay at the station. He was a member of Hank Penny's Plantation Boys. He composed many songs with a hillbilly flavor. In addition to WLW he also worked at WFMB Indianapolis (Indiana Hoedown) and WSM in Nashville, Tenn. (Barn Dance).

The only item I could find on the vaudeville team of Ford and Glenn was that in 1927 they assisted Powel Crosley Jr. when he was the radio announcer for the 1927 Cincinnati Reds opening day game.
The following information was graciously supplied by Mike Martini:
Ford Rush and Glenn Rowell came to WLW around 1926 from WLS in Chicago. They had several "song and patter" shows. For the adults they were "Ford and Glenn" for the kiddies they were "The Lullaby Boys."  In Chicago there was another duo called "Jack and Gene" (Jack Grady and Gene Carroll). In 1929 they had to break up due to Grady becoming ill so Gene came to Cincinnati and joined Ford and Glenn, forming a trio called "Ford, Gene and Glenn."  When it became clear that Gene and Glenn had the makings of a "team" Ford Rush was more or less forced out.
Ford stayed at WLW as the early kid show host of "Ford Rush, Old Man Sunshine" which lasted for a year. He then returned to Chicago. He may have eventually ended up in country music in Nashville.
"Gene and Glenn"  became national stars on NBC, based first in Cincinnati and later in Cleveland. Gene also did the voices of the fictional characters Jake and Lena and they were sometimes billed as "Gene and Glenn and Jake and Lena." In the 1940's the team split up with Gene going national with his character Lena being the maid, for a time, on the Fibber McGee and Molly show. Glenn returned to Cincinnati and was a kiddies show host on early television in 1952 with "Captain Glenn's Play Club" which later became "Captain Glenn's Bandwagon."  Glenn was always seen with a stovepipe hat. Rosemary Olberding also starred in the show. Mike believes he died in the late 50's. Gene ended up back in Cleveland at WEWS where he had several Television shows and died in 1972.

Phillips worked at WLW in the early 50's until he was fired when, as part of a comedy routine, he inserted a fake item into a newscast. He had said, "All members of infantry company, so-and-so report immediately to your draft board, because of some insurrection that was taking place in a phony country. The FBI is reported to have swarmed the station. He along with staff announcer, and future Bozo The Clown star Bob Bell, moved to Chicago and went on the air on WGN in 1956 as the "comedians from Cincinnati." Eventually he was labeled "The King of morning radio."